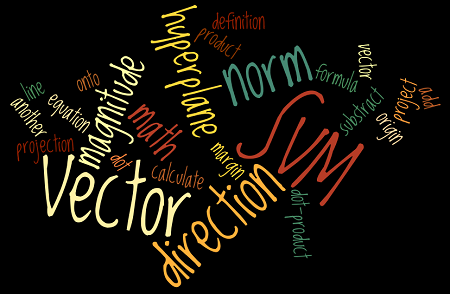 In the first part, we saw what is the aim of the SVM. Its goal is to find the hyperplane which maximizes the margin.

But how do we calculate this margin?

In Support Vector Machine, there is the word vector.
That means it is important to understand vector well and how to use them.

Here a short sum-up of what we will see today:

Once we have all these tools in our toolbox, we will then see:

What is a vector?

If we define a point

specifies a vector in the plane, namely the vector starting at the origin and ending at x.

This definition means that there exists a vector between the origin and A.

. We could also give it an arbitrary name such as

Note: You can notice that we write vector either with an arrow on top of them, or in bold, in the rest of this text I will use the arrow when there is two letters like

and the bold notation otherwise.

Ok so now we know that there is a vector, but we still don't know what IS a vector.

Definition: A vector is an object that has both a magnitude and a direction.

We will now look at these two concepts.

The magnitude or length of a vector

and is called its norm.
For our vector

is the length of the segment

From Figure 3 we can easily calculate the distance OA using Pythagoras' theorem:

The direction is the second component of a vector.

Definition : The direction of a vector

Where does the coordinates of

To find the direction of a vector, we need to use its angles.

We could say that :

Naive definition 1: The direction of the vector

is defined by the angle

with respect to the horizontal axis, and with the angle

with respect to the vertical axis.

This is tedious. Instead of that we will use the cosine of the angles.

In a right triangle, the cosine of an angle

In Figure 4 we can see that we can form two right triangles, and in both case the adjacent side will be on one of the axis. Which means that the definition of the cosine implicitly contains the axis related to an angle. We can rephrase our naïve definition to :

Naive definition 2: The direction of the vector

is defined by the cosine of the angle

and the cosine of the angle

Now if we look at their values :

Hence the original definition of the vector

. That's why its coordinates are also called direction cosine.

We will now compute the direction of the vector

If we draw this vector we get Figure 5:

as indeed the same look as

except it is smaller. Something interesting about direction vectors like

is that their norm is equal to 1. That's why we often call them unit vectors.

The sum of two vectors

Which means that adding two vectors gives us a third vector whose coordinate are the sum of the coordinates of the original vectors.

You can convince yourself with the example below:

The difference between two vectors

The difference works the same way :

Since the subtraction is not commutative, we can also consider the other case:

However, since a vector has a magnitude and a direction, we often consider that parallel translate of a given vector (vectors with the same magnitude and direction but with a different origin) are the same vector, just drawn in a different place in space.

So don't be surprised if you meet the following :

If you do the math, it looks wrong, because the end of the vector

is not in the right point, but it is a convenient way of thinking about vectors which you'll encounter often.

One very important notion to understand SVM is the dot product.

Definition: Geometrically, it is the product of the Euclidian magnitudes of the two vectors and the cosine of the angle between them

Which means if we have two vectors

and there is an angle

(theta) between them, their dot product is :

To understand let's look at the problem geometrically.

In the definition, they talk about

By definition we know that in a right-angled triangle:

In our example, we don't have a right-angled triangle.

However if we take a different look Figure 12 we can find two right-angled triangles formed by each vector with the horizontal axis.

So now we can view our original schema like this:

There is a special formula called the difference identity for cosine which says that:

(if you want you can read  the demonstration here)

Let's use this formula!

So if we replace each term

If we multiply both sides by

Which is the same as :

We just found the geometric definition of the dot product !

Eventually from the two last equations we can see that :

This is the algebraic definition of the dot product !

A few words on notation

The dot product is called like that because we write a dot between the two vectors.
Talking about the dot product

is the same as talking about

The orthogonal projection of a vector

, we would like to find the orthogonal projection of

To do this we project the vector

This give us the vector

We saw in the section about the dot product that

If we define the vector

as the direction of

.
Since this vector is in the same direction as

it has the direction

Why are we interested by the orthogonal projection ? Well in our example, it allows us to compute the distance between

and the line which goes through

We see that this distance is

Understanding the equation of the hyperplane

You probably learnt that an equation of a line is :

. However when reading about hyperplane, you will often find that the equation of an hyperplane is defined by :

How does these two forms relate ?
In the hyperplane equation you can see that the name of the variables are in bold. Which means that they are vectors !  Moreover,

is the same thing as

The two equations are just different ways of expressing the same thing.

It is interesting to note that

, which means that this value determines the intersection of the line with the vertical axis.

Why do we use the hyperplane equation

And this last property will come in handy to compute the distance from a point to the hyperplane.

Compute the distance from a point to the hyperplane

In Figure 20 we have an hyperplane, which separates two group of data.

To simplify this example, we have set

As you can see on the Figure 20, the equation of the hyperplane is :

which is equivalent to

Note that the vector

We would like to compute the distance between the point

This is the distance between

and its projection onto the hyperplane

We can view the point

as a vector from the origin to

.
If we project it onto the normal vector

We get the vector

Our goal is to find the distance between the point

and the hyperplane.
We can see in Figure 23 that this distance is the same thing as

We start with two vectors,

which is normal to the hyperplane, and

which is the vector between the origin and

be the direction of

Compute the margin of the hyperplane

Now that we have the distance

and the hyperplane, the margin is defined by :

We did it ! We computed the margin of the hyperplane !

This ends the Part 2 of this tutorial about the math behind SVM.
There was a lot more of math, but I hope you have been able to follow the article without problem.

Now that we know how to compute the margin, we might want to know how to select the best hyperplane, this is described in Part 3 of the tutorial : How to find the optimal hyperplane ?