This is the Part 5 of my series of tutorials about the math behind Support Vector Machines.
Today we are going to study convex functions.

Theorem: A local minimum of a convex function is a global minimum (Proof page 9)

What is a convex function?

A function is convex if you can trace a line between two of its points without crossing the function line. 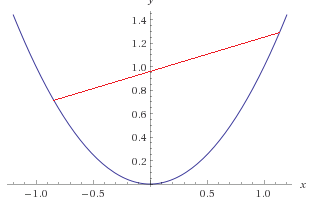 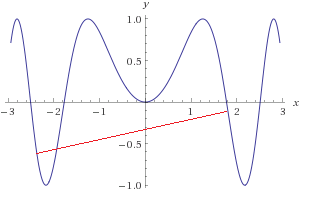 As you can see in the figure above, the red line crosses the function, which means it is non-convex. Note, however, that the function is convex on some intervals, for instance on [-1,+1].

As often, there is also an "opposite" concept:  a function 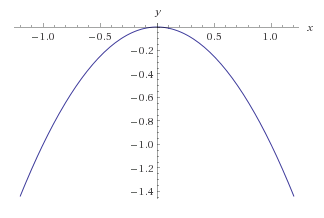 The problem here is that my original definition of a convex function is also true, I can trace a line between two points of the function without crossing the line...

So the mathematicians have been a little bit more specific, and they say that:

A function is convex if its epigraph (the set of points on or above the graph of the function) is a convex set.

But what is a convex set?

We use the same logic as before. A set of points is convex if when we pick two points belonging to the set and we trace a line between them then the line is inside the set.

If you guessed right, the circle and the triangles are convex sets. In the figure below I traced a red line between two points. As you can see, the line joining two points of the star leave the figure indicating that it is not a convex set.

The star is not a convex set

We can now use this knowledge to determine if a function is convex.

Step 1: We have a function and we wish to know if it is convex
Step 2: We take its epigraph (think of it as filling it with water but the water cannot overflow so it adds up vertically when it reaches the limits of the function)
Step 3:  If the shape of the epigraph is convex, then it is a convex function!

How do we know if a function is convex?

The definition with the epigraph is simple to understand, but with functions with several variables it is kind of hard to visualize.  So we need to study the function:

More generally, a continuous, twice differentiable function of several variables is convex on a convex set if and only if its Hessian matrix is positive semidefinite on the interior of the convex set. (Wikipedia)

What is the difference?

Example: is the banana function convex?

We saw that the Hessian of our banana function was:

Its principal minors of rang 1 are:

In our example, the function is defined in

which is a convex set. So we would need to prove that for any point we pick the principal minors are nonnegative.

We see that that minor

is always positive. However, we can easily find a point for which

is negative. For instance for the point

As a result, we can tell the banana function is not convex.

It turns out there are several ways to prove that a function is convex. For more guidelines on the subject, refer to this paper, part 2.1.

Why are convex functions so cool?

First, we saw that the local minimum of a convex function is a global minimum. It is a pretty good result to help us find a solution more quickly.

Moreover, in general, convex optimization problems are easier to solve. Why?

To get a better idea let us look at some figures. 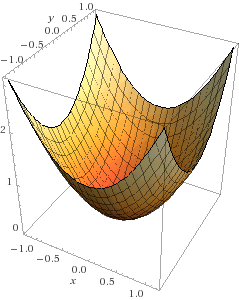 Imagine that solving the optimization problem is like throwing a marble onto a surface. In the case of the convex surface, like the one in the figure above, no matter where you put the marble, it will go directly to the center of the bowl which is the minimum of the function. 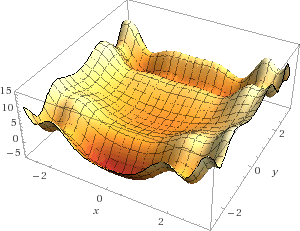 What if the surface is non-convex? Well as you can see throwing a marble randomly onto the surface has very few chances of hitting the global minimum. Instead, it is likely that the marble will fall into one of the many local minima. And when this is the case, what do you do? Do you try to push the marble to get somewhere else?  As you can see, the problem is much more complicated.

The marble analogy is interesting because it is basically what does an optimization algorithm called gradient descent.  Another way to solve an optimization problem is to use the well-known Newton's method. I encourage the interested reader to study these methods in detail and even to try implementing them.

In this part, we learned what a convex set is and how to tell if a function is convex. Moreover, we saw a visual representation showing us why convex optimization is usually much simpler than non-convex optimization: because there are no local minima.

Convexity is an important concept to understand when studying optimization. Now that we know it better, we will see another important aspect called "duality". Eventually, we will see how we can solve more difficult optimization problems. Go read the Part 6 of this tutorial series to find out! Thanks for reading.

I am passionate about machine learning and Support Vector Machine. I like to explain things simply to share my knowledge with people from around the world. If you wish you can add me to linkedin, I like to connect with my readers.